The use of information processing techniques in WSN simulations

In pursuance of integrating Wireless Sensor Networks (WSNs) with other systems, the use of techniques from other fields, such as machine learning and information processing, are becoming more common.

That is, the networks produce information about the environment using the data that they produce: it can be a temperature value, the number of cars in a traffic jam, the picture taken by a camera, etc.. If a network has access to external information, it can improve its own work by saving energy, for example.

During the simulations for my PhD project, I faced the problem of missing network simulations that are not only focused on the packet exchange between network elements, but also in the data that is transmitted between them. That is, in OMNeT++, there should be a tool to evaluate the WSNs on how they evolve and react to the environmental changes.

To solve that, I used OMNeT++, INET and MiXiM to simulate an architecture for exchanging information between external WSNs, described here. For those simulations, I developed a special type of gateway. It is directly connected to their respective WSN sink nodes, as well as maintain an overlay connection with the other gateways in order to exchange information about their networks and measured data: 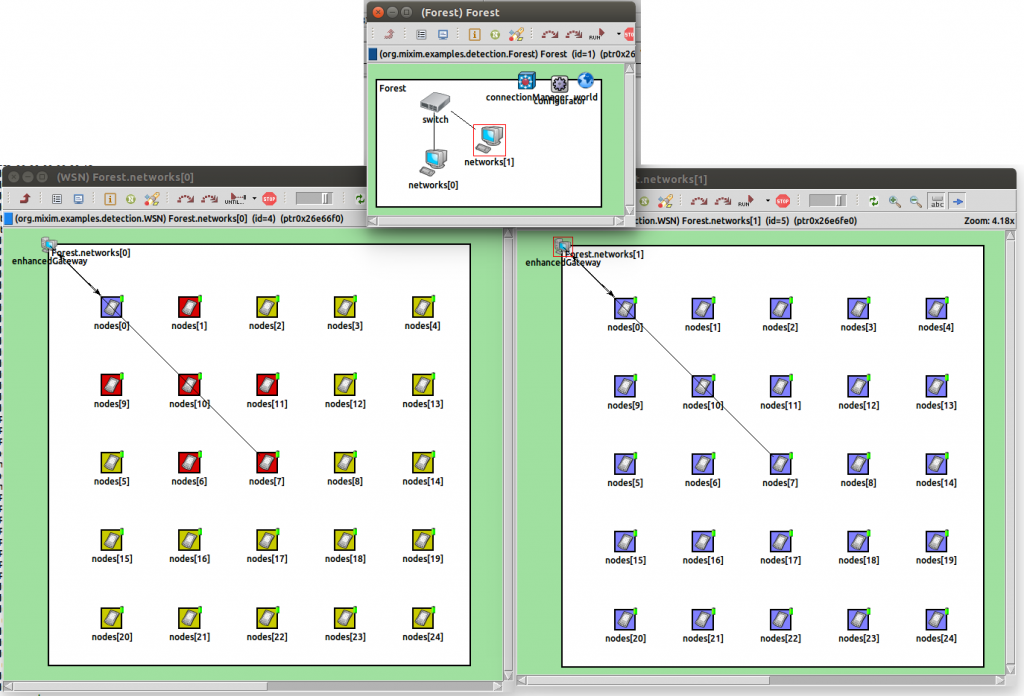 Screenshot of the simulation

In this simulation, each WSN has a different task:

They exchange their data through their gateways (in the rectangle at the top), which are also responsible for processing the information. However, during my experiments, I got the information that was received by the gateways and processed the information in Matlab, due to its facilities to manipulate such data.

In the end, I used the output from Matlab to run new experiments in OMNeT++, which could be automated if there was an API to integrate both tools, for example.

I presented an abstract of this work in the First OMNeT++ Community Summit 2014. The video is here:

Reference for the abstract

The abstract itself can be found in arXiv.org as Towards information-centric WSN simulations.